Racing, and the weather, were finally hotting-up.

In the CC Breckland 12 hour, Chris Lea (Buxton CC) rode a distance of 260 miles. Actually, that’s not true. The official result was 259.99 miles. Rats. The weather was dry, mostly full sun apart from a brief cloudy period around midday meaning that it was somewhat on the hot side, and with a brisk 13 to 14 mph westerly for much of the day. Pretty decent, but not brilliant conditions. What to make then of the new comp record set by Joe Skipper, a frankly stunning 325.55 miles, at an average speed of 27.1 mph. There is a video of Joe that you can watch, here:  https://www.youtube.com/watch?v=nIDFnaQeWxU&feature=emb_logo. Fastest female was Kim Barfoot-Brace, who looked strong all day, riding 272.33 miles. Full results:  https://cyclingtimetrials.org.uk/race-results/19859#anchor

Andy Hicklin (Peak RC) rode the Coventry CC 10 on the Saturday, on the K11/10T course which uses the A45 dual carriageway to the south-east of the city. A crosswind out meant a slightly faster return, with Andy recording 21-57.  Sounds a nice course, apparently with fairly light traffic. Fastest male was Travis Bramley in 19-10, whilst Hayley Simmonds was fastest female in a rapid 20-31. Full results: https://cyclingtimetrials.org.uk/race-results/19776#anchor and https://cyclingtimetrials.org.uk/race-results/19775#anchor

On the previous Wednesday, Peak RC organised a closed-road hill climb up Longstone Edge. Quickest of the North Mids vets, by some margin, was the promoting club’s Chris Myhill, in 5-09, followed by Dominic Watts (Veloviewer) in 6-16.  Lez Young (Lincoln Whs) battled the additional weight of a third wheel, on his trike, to record 8-19. There were several riders who didn’t sign out after the event, resulting in a significant number of DNFs, but fortunately no North Mids vets made that mistake. Fastest overall was 2018’s national hill climb champion, Andrew Feather, in 4-23. Rebecca Richardson was fastest female in a rapid 5-23. Full results: https://cyclingtimetrials.org.uk/race-results/19919#anchor

The Sherwood CC 25, on the A25/34 course on the Saturday afternoon attracted a large contingent of North Mids riders. The course mostly uses the A46 dual carriageway southwest of Newark. The road is usually fairly quiet, has an excellent surface, but is rather exposed. Often it is a headwind to the southern turn. Not last Saturday. Riders were helped along on the outward leg, benefitting from the tailwind, appreciating the assistance up the climb at Bingham, but then had to work hard against the headwind all the way back to Newark – an exposed 12.5 mile leg.

Full results from the Sherwood event are here: https://cyclingtimetrials.org.uk/race-results/19712#anchor Fastest male was Joshua Giddings in 48-17, still a junior! Fastest female was Francesca Hall in 54-43.

Andy Hicklin (Peak RC) and Chris Lea (Buxton CC) trekked to Norfolk for a 50 on the B50/20, promoted by the CC Breckland on the Saturday. This course uses a stretch of the A11 southwest of Norwich. Very gently rolling, with each 22 mile lap consisting of 15 miles of really well surfaced road and 7 miles of cratered, patched and rutted concrete that is a stern test of mechanical if not dental integrity. Nevertheless, in the right conditions it is fast. And so it was, despite much drizzle, a bit of dry, some proper rain, and some torrential rain. Wind speed at the nearby Tibenham airfield (ex WWII and USAAF 445th Bomb Group from Sioux City, Iowa, flying Liberator bombers, now used by Norfolk Gliding Club) was just 7mph throughout, from the northeast. Both of the North Mids vets rode PBs, 1-48-49 for Andy and 1-49-12 for Chris. Fastest male was Mark Smith in 1-38-51, with fastest female being the 2018 VTTA BAR Jackie Field in 1-51-27. The super-fast Dan Bigham was DNF due to a problem with an insecure rear wheel, which fortunately manifested itself prior to the bombed concrete. Full results: https://cyclingtimetrials.org.uk/race-results/19842#anchor

The prospect of rapid times was hampered by strong winds on the Saturday, and cool and showery conditions on the Sunday. Surely summer hadn’t ended already?

The E2/10 should be a fast course. Five miles on the rolling dual carriageway of the A11 to a quick turn at Four Went Ways roundabout, then a blast back to the finish at Six Mile Bottom. Not so this Saturday. There was a block headwind to the turn, resulting in lost time which can never be regained (with apologies to the laws of physics). As a consequence there were 39 non-starters. Keith Ainsworth (Sheffrec CC) made the best of it and did 21-34, good enough on the day for 7th place overall. Martin Bullen (Peterborough CC) was shocked to find that he’d only done 26-28. One rider who seemed to overcome the gale to some extent was Andy Newham (Lincoln Whs CC) on his trike, recording 24-58. Fastest overall, in what is a slow time for this course, was Adam Bidwell in 20-39. Fastest female was Jackie Field in 23-31. Full results: https://cyclingtimetrials.org.uk/race-results/21192#anchor

Two weeks previous, Martin Bullen was over a minute faster on the undulating single-carriageway B10/37R south of King’s Lynn, with 25-16. William Perrett was quickest overall in 19-24, with fastest female Francesca Hall in a fine 21-48. Full results: https://cyclingtimetrials.org.uk/race-results/19830#anchor

Also , the previous Saturday, Mat Ivings (Buxton CC) rode the Wrekinsport 10 on the D10/23 which uses the A53 southwest of Tern Hill. Potentially a fairly quick course, but again plagued by strong wind. In this case it was tailwind out and headwind return. With 21-33 for 12th place, a very decent ride in the conditions. Fastest female was Deb Hutson-Lumb in 24-04, with the quickest time on the day being the only sub-20 ride, 19-52, by George Mills-Keeling. Full results: https://cyclingtimetrials.org.uk/race-results/20243#anchor

Sunday morning’s Darlington CC 25 on the T254/1 attracted a few North Mids vets. This is a very quiet course which uses the rolling A-road which runs parallel to the A1M between Leeming Bar and Kirklington. Andy Hicklin (Peak RC) rode 57-41 for 28th place, Andy Whitehead (Rockingham CC) 1-02-07 and Ala Whitehead (Rockingham CC) 1-23-22. Harry Tanfield rode an incredible 47-08, more than 4 minutes clear of the 2nd placed rider. Is that the fastest 25 time of the year thus far? Sophie Lankford was fastest female in 59-22. Full results: https://cyclingtimetrials.org.uk/race-results/20112#anchor

VC Baracchi’s wind-blasted ‘50’ in Norfolk (bar a mile in Suffolk) near Bungay had a visitor from the North Mids, in the form of Trevor Mayne (Birdwell Whs), who was quoted thus by the Eastern Daily Press: “Any little rises felt like big hills, said Trevor Mayne, who grew-up in Bungay but now lives near real big hills”. It must have been tough as Joe Skipper, who won the event in 1-45-11 was only one mile an hour faster than his recent comp record-breaking ride in the CC Breckland 12 hour. Trevor recorded 2-03-54. Hannah Peel was fastest female, in 2-06-40. Full results: https://cyclingtimetrials.org.uk/race-results/19867#anchor

The main event was the combined Rutland CC and VTTA North Midlands 10 on the O10/1. Never mind the National 10 mile Championships down south, Hatfield Woodhouse was where the real action was! Saturday afternoon just about stayed dry, but a cold 20 mph north westerly made for conditions more reminiscent of early season than late August. Nevertheless, there was a good turnout and some very strong performances. Best of the North Mids vets on both actual and standard time was a dominant Keith Ainsworth (Sheffrec CC), with 20-57 and +6-48, taking overall 5th place. Zoe Hibbard (Bolsover and District CC) flew the flag for the North Mids women in the main event, with an actual time of 28-30. Ala and Andy Whitehead, of the Rockingham CC, rode their tandem to a fine time of 24-11. The results for the North Mids riders are as follows:

The main event was won by Oliver Peckover, in a super-fast 19-39, the only sub-20 ride of the day. Fastest woman was Isobel Conibear in 25-20. Full results: https://cyclingtimetrials.org.uk/race-results/19931#anchor

Birdwell Wheeler Trevor Mayne travelled to Northumberland on the Sunday to ride the Tyneside Vagabonds'-run 100-mile event and VTTA championships. On a cold day with rising wind on quiet undulating roads, competitors negotiated 4 laps near Morpeth. Riders were caused significant delays by a road traffic accident which affected all but one of the laps - at one stage riders had to carry their bikes through a field to get round the emergency vehicles. Mayne started well although faded in the second half but nevertheless hung on to complete in 4-47-01 for 33rd place (and +13.03 on std). The winner was 100 mile novice Robbie Mitchell with 3-51-14 (actual) and the VTTA championship winner was (2nd actual) Darren Yarwood with +55.26. Joanne Rea was fastest woman in 4-30-03. In an event of 77 competitors, 19 failed to finish, which indicates how hard conditions were. Full results: https://cyclingtimetrials.org.uk/race-results/20071#anchor

In Bank Holiday Monday morning’s Drighlington BC 25 on the V236/1 course. Cold, but apparently good conditions due to light winds. Steve Scott (Elmsall RC) in his first event of the year did a short 58, 58-06, his best since 2017, whilst Martin Bullen (Peterborough CC) was pleased with 58-28. This course is two laps of a nicely-surfaced stretch of the A168/A19 around Thirsk, climbing very slightly to the far turn, but is rather exposed, so well done to those from the North Mids who rode and (hopefully) were able to make the most of the light winds. Alex Royle won with 47-13 whilst Abi Smith, still a junior, was fastest female in a superb 54-43. Full results: https://www.cyclingtimetrials.org.uk/race-results/21236#anchor 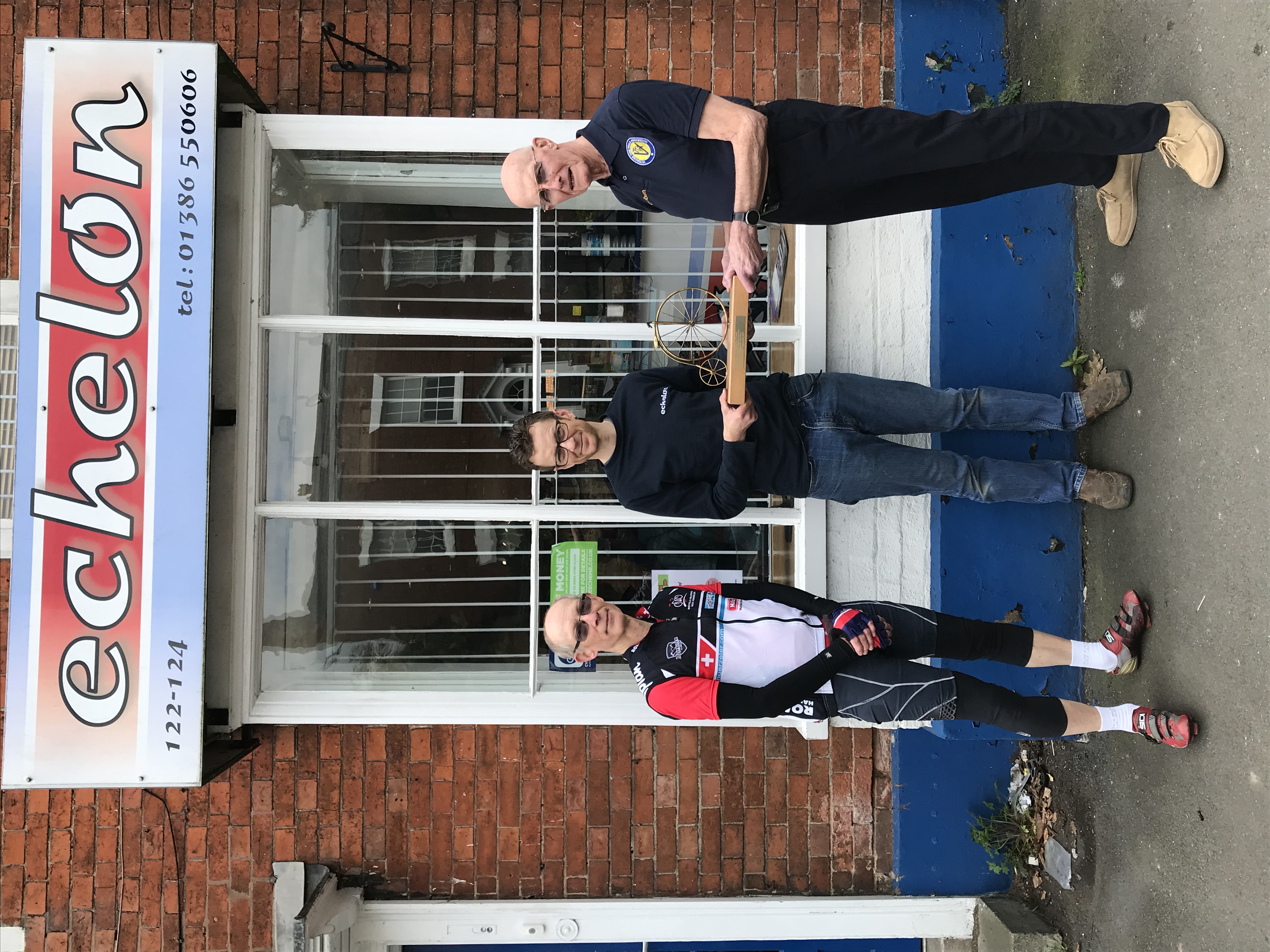