Standards - all of the members who have paid for standards have their baselines on the VTTA Mids site. Don't forget that you can only claim standards for those events completed after the date that payment for standards was received.

BAR competitions - under profile - competitions, tick the boxes for those competitions that you want to be considered for (BAR, three distance, short distance). If you have linked VTTA to CTT then your results will be regularly updated showing where you are in the standings. You WILL NOT need to claim as I will receive the final tables of results. Only claim (on paper) if your CTT and VTTA memberships are not linked.

Starting on Thursday September 23rd there is a Time Trial league for Midlands VTTA members starting on Zwift. There will be ten events, all over ten miles with the fastest eight results on standard (totalled) taken to determine overall final positions. To provide more competition than just our members it will be part of an existing scheduled event which is the ZHR Masters TT series on a Thursday – the 7.30pm (19.30) event - make sure this is the one entered as there are two other events under that name on the same day. This is an accurate 16.1 (10mile) flat race held on the Tempus Fugit course.

Make sure their Zwift weight is accurate in their settings.

Be enrolled on ZwiftPower and put (Mids VTTA) after their names on ZwiftPower (profile, settings) so I know whose results to include, (and on their on-screen name so we all know who our competition is during the ride). For anyone unfamiliar with Zwift and Zwiftpower here is a helpful link.

Use a Time Trial bike – if you don’t it will default to another (maybe slower) TT bike. Riders are sent off at 15s intervals. There is an approximate 15s lead in to the start line.

Results in ZP will give position based on time.  I will take results from ZP and produce a plus/minus on standard for each competitor (NOT the one in ZP as this is not a correct on standard comparison as they take the time for a 40yr old male minus VTTA offset for some reason). I will publish this on facebook under VTTA Midlands site and in the news section on the VTTA Midlands website.

The reasons for the event being the one it is are that it is part of an already established event so there are other riders to compete against, but mainly that it is the same distance each week. I was looking at the CW 10 on Wednesdays but the courses vary and Dr Hutch for example does 21min on the faster ones but 25mins on the very hilly ones. This would mean the pluses on standard would be all over the place. P.S.  no you can’t use times in this event for standards and BAR applications (he he). 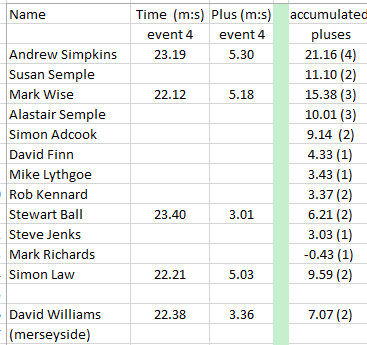 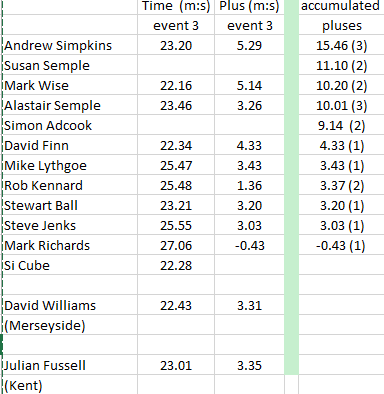 Entries for Zwift TT league from Merseyside and West

Entries for Zwift TT league from Merseyside and West