MINUTES OF THE ANNUAL GENERAL MEETING

The Chairman gave a brief summary of these minutes which were then passed as agreed.

There were no matters arising from the AGM held in 2020.

4.  The reports from Officers

These had been published on the Group Website as attachments to the Minutes of the AGM.

Chairman – In addition to his issued report Tony stated NEC had raised the point whether Standards should be paid for up front or paid when claimed. As this was a Group decision there was some discussion at the meeting. The meeting decided that it was more of a motivation for the member to pay up front and there would be a loss of income to the Group if payment was made when claiming, as Standards paid for were not always claimed.

At 11.00am a minute’s silence was held in remembrance of Darren Mairoinis and other members who have died this year.

Secretary – No queries were raised. However he has been notified that a Subscription Reminder will be sent by National IT on December 1st. He has already sent a postal reminder to members without computer access.

Recorder – In addition to his issued report David gave a special mention regarding Joanna Cebrat TT performances and in particular her amazing 100 time.

He also reminded members of the need to link with the CTT system which provides the individual finishing times for the new on-line Standards System.

Treasurer – After giving his report Edgar dealt with the following questions -.

Mike Cotgreave queried the overheads compared with the income. Edgar stated that the savings buffer was more than adequate to cover foreseeable outgoings.

Peter Brocklehurst asked if it is possible to make payments on line to the Group’s Accounts. Edgar replied that these were old accounts and did not have that facility.

Derek Hodgkins wanted to know whether it was better to pay via the website or send a cheque. Edgar said he had no preference.

Newsletter Editor - In addition to his issued report Ken thanked Ian Peacock, who was at the meeting,for sending regular results for publication.

The following positions were elected unopposed –

8.      The NEC have requested that Groups consider the proposal that HLM Members should start paying for the posted Veteran magazine - estimated cost £8. There would be no charge if emailed.

After some discussion the general opinion appeared to be that it would be acceptable to charge new HLM’s for a posted copy but continuing no change for existing members.

from catering for functions.

Thanks to Lynne Wright fo rthe provision of wonderful cakes.

In that time the Group has been through a range of experiences possibly never experienced by many of our members.

The very restricted social movement during 2020, lack of events, loss of friends.

Slowly but surely, we are returning, restablishing, “a new normal”.

Despite the lockdown, at the first opportunity testers were out on the roads again, organisers rearranging event dates, makeshift HQs popping up and time trialling got underway again.

The result is that we have seen some tremendous performances nationally and locally from VTTA members.

All our events are duly recorded in David’s report.

There have been downsides, several of our members have passed away…most tragically the incident involving Darren Maroinis.

Our sport takes place in a dangerous environment, fatalities are rare accidents not so, remember Tom Thornley.

VTTA are introducing two closed circuit championships for 2022 season, at Croft and Thruxton.

There is a growing thought that time trialling is on the decease and that closed circuits could be a means of arresting that trend.

A search for safer alternatives will continue.

My thanks, appreciation, to the organisers and clubs who have enabled the Group to continue the promotion of our award counting events. Charles Carraz, Phil Robinson, David Clayton, Matt Iving and David Wright and their clubs for being so supportive.

During next season we intend to promote more of our own events starting with the VTTA National 15 ml Championship in April.

Look out for the invite to marshal!!!

Finally, most importantly, on the behalf of the Group and myself, thanks to Ken, Edgar, Nev and David for their support and work throughout the year.

Six committee meetings attended by the five core officials were held during the year either face to face or virtual via the internet. In addition the committee maintained frequent contact by email.

All members were notified of the AGM and the Prize Giving Luncheon by email or letter post if the member has not supplied an email address.

Overall Group membership stands at 149 which includes 23 Honorary Life Members (HLM) and 22 Joint members. I am pleased to report that this total is the same as last year despite the pandemic turmoil and the cancellation of events. Although we lost 17 members due to lapses and deaths, this has been compensated by a number of new members.

The committee does not always hear which members have died, so if you hear of any member’s deaths then let us know so that we can amend the membership record and Ken can report their demise in the Group Newsletter for the Veteran.

There is no longer automatic Honorary Life Membership (HLM) for 80 year olds but we can award this membership if the Group decides that they are a deserving case and have made significant contribution to the VTTA. If any member wishes to propose another member for HLM then let the committee know.

The five core officials work well as a team in running the Group, however if any member wishes to make a contribution to this work and help to decide future policies then they can be co-opted on to the Committee.

As we no longer have a Social Secretary, Tony Farrell supported by his wife Billie has once again taken on the task of organising the Luncheon and Prize Presentation.

After a lapse of some years the Group will be again organising its own events. This will guarantee an entry acceptance for any of our members, will encourage new members and enhance our standing in the local time trialling scene.

You are probably aware that our Group Chairman, Tony Farrell, has also been elected as the National Chairman. In addition our Group Recorder, David Wright is a National Group Forum member.

I am quite confident that with our two very able officials influencing the NEC and promoting forward thinking the VTTA will see a resurgence in the near future.

Manchester and NW Group have had a good year of racing, adapting well to the postponement of many early season J course events and a congested calendar later in the year.  As such, we can return to normal practice and have pleasure in awarding medals, plaques and trophies for achievements in the 2021 season.

The VTTA continue to invest in the website, with the development this year of an online claiming system for Standards.  After some minor teething troubles, the system is up and running.  It is very user-friendly and keeps members up to date with improvements throughout the year in real-time.  Event performance data reads into the VTTA system from the CTT system.  Therefore, it is essential members link their VTTA and CTT accounts.

28 members registered for standards in 2020 which rolled over to this season.  A further 11 members register in 2021, making 39 members eligible for Standards awards in all.  Eleven members have made claims and will receive medals or plaques for a total of 28 standards awards for bikes and one for a trike.  Interestingly, seven members qualify for Standards improvement awards and have chosen not to claim.

It is proposed to keep the fees for standards attempts the same as 2021, that is, £15 to cover any number of attempts at any or all distances on a single machine during the 2022 time trial season.

Results of the National and Group season long competitions are available on the VTTA website under Groups, National Results.  https://www.vtta.org.uk/groups/competitions/manchester_nw  These results tables cover all open events and over 20 Manchester and NW members feature here.  Five members completed the BAR. Note, these tables do not reflect the winners of our local competitions that only use J D and L courses.  The winners of the Group competitions are set out in the VTTA Manchester and NW Trophy Winners table below.

Congratulations to Joanna Cebrat for her outstanding achievements finishing 3rd, 4th and 6th fastest women on standard in the VTTA National events of 12 hours, 100 miles and 10 miles respectively.  Her 12 hours distance was an extremely impressive 264.03 miles (actual).

Regretfully, the qualifying events for the 25-mile Championship Cup and the Memorial Handicap Shield did not conclude this year.  The Janus CC event was cancelled on the day due to local flooding.  The Seamons CC event was abandoned after the tragic accident of Darren Maironis.

It is with the deepest sadness that we remember Darren, a great champion in recent times, records holder, winner of countless events and trophies, and a very good friend of many in the Group.  He will be sorely missed.

We have had another successful year with seven members setting twelve new Group age records in the year and claiming two historic records, see Group Age Records table below.  Any record is an incredibly worthy achievement but Adrian Hughes 100 miles time of 3:35:47 is a particularly stand-out performance.  It is close to a national record and smashes the previous Group record displacing five records of younger riders.  All Group age records are up to date and listed on the VTTA website at https://www.vtta.org.uk/groups/records/manchester_nw

Finally, the Manchester and NW Group list of Trophies and events for 2022 are appended below.  There are 12 trophies encompassing single local events and season long events at Group and National level.  In 2022 Manchester and NW Group is hosting the National 15 miles Championship on the 16 April.  This adds to a growing list of Group events, making a total of six for next season. 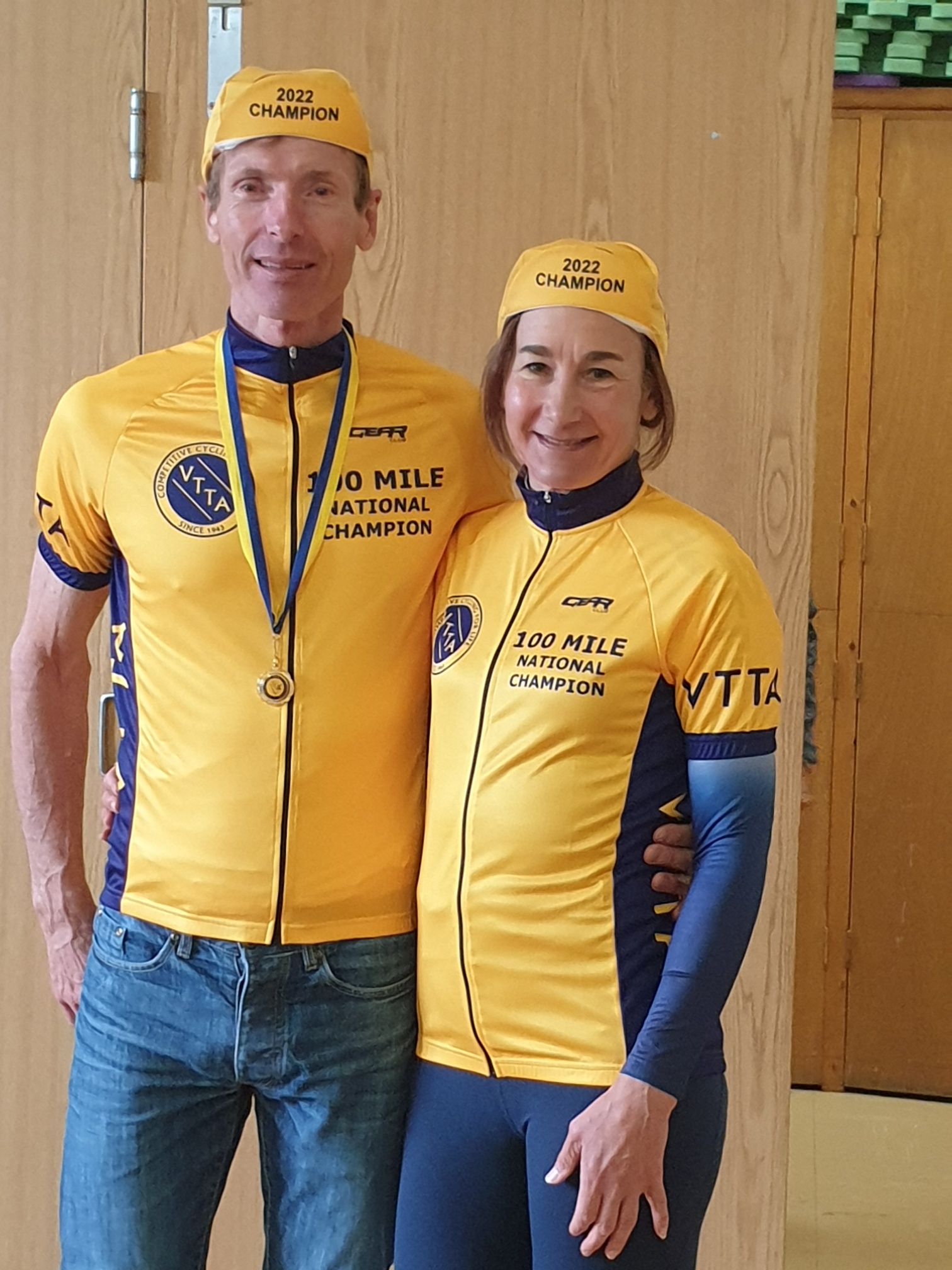